Holes in the map, part 9: Wolves 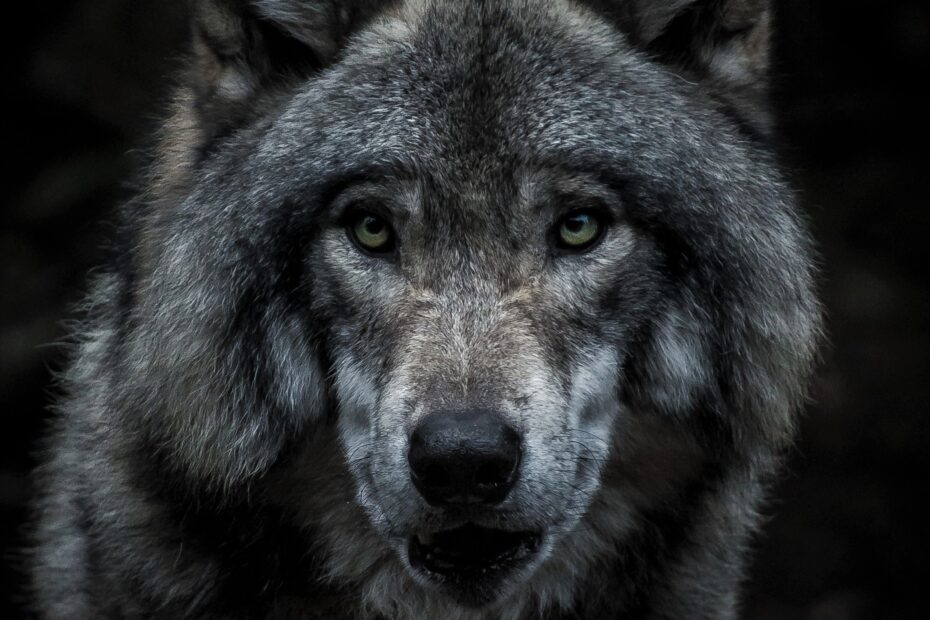 In the final part of our series about species missing from the Lake District, Site Manager Lee Schofield takes on the wolf.

A ruined stone building known as Low Loup perches on a fellside shoulder of Mardale Common, high above Haweswater reservoir. It lacks only a roof, and sheep use it to shelter from the wind, keeping its packed earth floor tightly nibbled. The ruin makes a popular photo opportunity, the drama and desolation of the bare stonework, set against the grandeur of the High Street ridge and the central fells beyond. For me, it makes a handy spot for a bite of lunch while working up on the common.

Low Loup is an intriguing name. I’ve not found any references to it in place name books, but I’ve got just enough of a grasp of Latin to know that it was most likely named for Cumbria’s erstwhile top predator, the grey wolf.

The waves of human settlement and occupation that have occurred in Cumbria across the centuries have left our landscape peppered with names with diverse origins. The Vikings probably had the greatest impact on our place names, but the Latin-speaking Romans who came before, and the French-speaking Normans who came after, also left their marks. Loup is still the name for wolf used in France today.

Low Loup is a long way from being the only Lake District place with wolves in its name. Anywhere beginning with Ul- is likely a wolf place; Ullswater, Ulpha, Ullock, Uldale, and Ullscarf, to name just a few. Places with Whelp-, such as Whelp Side refer to wolf pups. Clearly there were plenty of wolves in the landscape when names were being dished out.

Of all the species I’ve written about in this series, wolves are without doubt the one with which we’ve had the most difficult relationship, and the one whose return would be the most controversial.

Wolves, perhaps more so than any other species in the Northern hemisphere are deeply wound into our culture and mythology. They are almost invariably cast as evil, ravenous, malevolent creatures, a trope which is force fed to our children early on, thanks to tales of big bad wolves blowing down the houses of pigs and eating small children and their grandmothers.

In a wild, pre-human world, alongside bear, lynx and eagles, wolves were Britain’s top predators. Red and roe deer would have been their main prey, along with the now extinct European elk, or moose. Key to the survival of any predator is adaptability, and wolves readily switch to other, smaller prey such as rodents, amphibians and birds to keep their bellies full.

Honed by aeons of evolution, all wild creatures have developed strategies to defend or hide themselves in order to avoid becoming a meal for an animal higher up the food chain. Domestication, to a degree, undoes much of this. Through thousands of years of selective breeding we humans have taken much of the wild vigour from our livestock. Modern sheep, cows and pigs are all meatier and more manageable facsimiles of the mouflon, aurochs and wild boar that they originated from. No farmer wants to work with an animal likely to cause serious injury or to vanish over the horizon.

As settled agriculture expanded into the wilderness, wolves were presented with prey that were not only fatter and more numerous than their wild counterparts, but also slower and easier to catch. Domesticated cattle can still put up a fight, but compared to deer, a flock of sheep and their helpless lambs must have seemed like an all you can eat buffet.

And so, the shepherd came into being. I can think of few professions more highly revered through history than the shepherd. Jesus was the Good Shepherd, and Mohammed also did a stint, as did many other prophets; the simple, isolated life seemingly opens the mind to the word of God.

When not receiving divine wisdom, one of most important functions of the shepherd was to protect the flock from predators. A thousand years ago, the shepherds of the Lake District had several they needed to be wary of. Golden and white-tailed eagles may have taken young lambs if left untended, and if a flock strayed too close to woodland, lynx may have posed a threat, but defending the sheep from wolves would have been the primary preoccupation.

Now that our big carnivores are largely gone, sheep grazing the hills are left to their own devices for days at a stretch. When wolves were around, this would have been disastrous. So, the shepherd, with the help of trusty dogs, would have spent far more time with the flock, and gathered them into a fold by night.

Not far from Low Loup are the remains of a large sheep fold. It’s still fairly intact, likely having been in use until recently. Like many similar ruins, it has the remains of small sleeping quarters attached. This is where the shepherd would have spent the night, close to the flock, with their dogs to raise the alarm should a wolf come too close.

This type of close shepherding was vital to protect the flock, but wolves were also vigorously hunted to reduce the threat further. The details are hazy, but legend has it that the last wolf in Cumbria was killed at Humphrey Head in 1390. With lynx and bears long gone, and with eagles also out of the way by the late 1800s, sheep and their shepherds haven’t had quite as much to worry about for the last few centuries.

The UK is increasingly an outlier in Europe when it comes to wolves. Because of our island status, wolves can’t naturally recolonise. This isn’t the case in mainland Europe, and with more enlightened attitudes towards nature, wolves are staging an impressive comeback. There are thought to be around 12,000 wolves across the continent, including in small, densely populated countries like Belgium and the Netherlands.

As you might expect, not everyone is thrilled, but the response is far from universally negative, even among farmers. In remote mountainous areas, the return of wolves is driving a resurgence in traditional shepherding practices and the use of livestock guardian dogs. Coupled with training, government subsidies and compensation payments for predated livestock, rural people in many parts of Europe are slowly learning how to live alongside wolves once again.

Wolves and other predators have dramatic impacts on ecosystems. When wolves returned to Yellowstone National Park in the USA, after decades of absence, a dramatic cascade of events took place. Without wolves to keep them in check, deer numbers in the national park had skyrocketed, to such a degree, that they were preventing the growth of young trees, and slowly but surely the landscape had become more open and many species were struggling as a result. With wolves back on the scene, deer numbers were not only reduced through predation, but their behaviour was modified too. The wolves kept the deer on the move, and so patches of land were spared the incessant grazing, allowing woodland to regenerate. As trees along rivers recovered, they provided shade, and by falling into the water they diversified the habitat, improving it for fish and many other creatures. In some places, this even encouraged the rivers to change course, rewetting land and allowing huge areas of wetland to recover.

This is one of the best-known examples of how predators influence their environment, but as wolves retake lost ground in Europe, similar benefits to other species and habitats are being observed again and again. I have little doubt they’d have the same positive impact on our struggling wildlife in the UK, given the chance.

At present, the prospects for wolves returning to the Lake District are pretty remote. Further north however, calls for their reintroduction are growing louder. Just like in Yellowstone, much of the Scottish Highlands suffers from excessive deer grazing, suppressing the recovery of vast tracts of what was once a richer, more wooded landscape. Proponents of wolf reintroduction to Scotland argue that having a native predator that we exterminated back in the landscape to keep deer numbers in check would be preferable to the huge culls that would be needed to achieve the same effect. It may not happen in my lifetime, but as the rest of Europe learns to live with wolves again, the case for bringing them back to our shores seems only likely to strengthen.

Wolves can range over huge areas. If and when they return to Scotland, it’s well within the realm of possibility that they might expand southwards, back into the wolf country of the Lake District. It will take some adjustment, but this landscape has never just been ours, and perhaps it’s time we learned how to share it again.

Read all our other Holes in the Map articles in our blog.