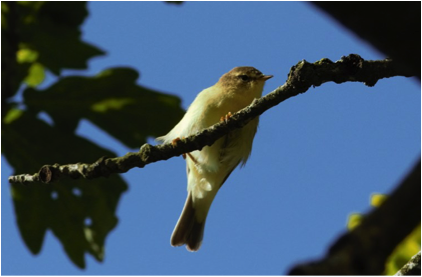 Join Tamsin as she reminisces of her adventures with bracken, badgers, banana bread and so much more, whilst on her residential volunteer placement at RSPB Haweswater.

A few weeks ago I boarded a train at Euston headed for Penrith, the North Lakes. I was excited and looking forward to a week outdoors, away from the constraints of the desk and otherwise generally sedentary lifestyle. I had packed all my favourite toys; camera, long lens, laptop, binoculars, but also the essentials; gardening gloves, full wet weather gear, old clothes for manual labour.

RSPB Haweswater manage an estate which forms the catchment area for the reservoir that supplies Manchester with drinking water. The utility company own the land and support the RSPB re-wilding and biodiversity initiatives that improve the land as this also improves the water quality, making the water cycle more efficient. Historically the area has always grazed sheep, so there is a farm house, paddocks, hay meadows and other farming accessories.

Today began with odd jobs around the farm, watering the young trees followed by a trip up Swindale valley to clear bracken from around slightly older young trees. The trees are protected from the deer (a mixture of Roe and Red) and sheep by cages but the bracken grows up quickly and blocks the light. Best way to clear bracken I hear you ask? That’s right – a scythe. I’d only used a scythe once before in Russia when working at my hosts’ dacha to ‘mow the lawn’, but it didn’t take too long to get into the swing of things.

We were treated to meadow pipits calling around us, and Red deer in the distance. My favourite thing about Haweswater is the soundscape – there are practically no unnatural noises, no traffic noise, no distant vibrations or whirring of trains or power tools, pretty much just the birds and the breeze.

A lovely first day was rounded off with an evening of badger watching in the hide. This recent addition helps provide some extra income. A small amount of food is put out every night, whether or not there are paying guests, so the badgers can be relied upon to show up.

Today was a hard slog along a very steep 5 km hike to get up on to High Rise, an area of old Roman roads and ridge walks to carry out a cross country vegetation survey. This was actual data collection! Very exciting stuff for an analyst normally concerned with the publication end of the data chain. The vegetation survey consisted of taking readings from 26 coordinates, each 200 m apart in 5 rows of 1 km transects, plus one enclosed area. I was scribing for the RSPB warden, as you need to be familiar with different species of grasses and shrubs to report accurately on them. There was a lot of uphill and downhill traipsing over rough tussocky ground which did get rather tiresome, but the bilberries (dwarf shrub) were out so a snack was never far away, and we saw a juvenile Peregrine take down a crow, which was pretty spectacular!

Despite my fairly athletic hobbies (rock climbing) and attempts to be fit and healthy (yoga, vegan) I noted how there is just no substitute for spending your life outdoors walking every day. My body was not used to it, and complained a lot, whereas the warden just seemed to move effortlessly over any terrain. I was inspired to build more movement into my daily life, even if it’s only 20 mins a day – but do something!

The general consensus after the vegetation survey had been that today would be an easy day. This turned out only partly true. The hay meadow had an invasion of dock, which does not make good hay and was about to seed, so off we went to dig it up before it could multiply further. At least it was work you could take at your own pace, we each had a fork and a bag and steadily work our way across the fields. After lunch I confess I was overcome with weariness and had to have a little nap, whereupon it started to drizzle. But this was fine, it is understood that this is not the Gulag – there will always be something within your capacity that you can do to contribute.

We finished early and in the evening I went down to visit the red squirrel hide and had a wonderful time watching three of these gorgeous creatures chase each other around trees, squeaking furiously. On the way back I got a nice shot of a male redstart; I’d seen plenty since arriving but more often it was just the tell-tale flash of an orange rump as they flew away.

Every fortnight RSPB Haweswater organise a volunteer day which is attended mostly by local retirees. Including the residential volunteers this made about 10 people. We set off for the end of the reservoir, Mardale Head, to collect the wire guard cages from around trees that had died. I was introduced to a new tool; fencing pliers. We worked as a team, some of us removing the fencing staples with the pliers to separate the wire cage from the posts and the others gathering the cages and posts.

When everything had been collected we set up a relay to move the whole lot, some 40 cages about 2 km, so they were in the right place for the next stage – setting up around new trees. It was a good day out meeting interesting people, many of whom come back every fortnight to help out. We were rewarded with vegan banana bread back at the farm house and someone even found an emperor moth caterpillar while we were out; huge and green with pink spots – and very juicy looking.

In the evening I went up the bridle path to the top of the valley where there are little craggy outcrops and a local high point where you can sit enjoy the soundscape and view. It’s a wonderful spot to simply contemplate the universe, you can see for many kilometres all around and still not see a single other human, and very little evidence of humans. Very different to the daily bombardment of the city on the senses.

Day 5: Potting Up and Off

My train home was around midday so my final day was just a half day of working in the poly tunnel up-potting young plants destined for re-wilding overly grazed areas. I’d gone for a wander in the morning and got a few more snaps of some birdies, a young wren, a willow warbler and a juvenile redstart.

I can’t recommend volunteering for RSPB highly enough, since I started I’ve met so many knowledgeable, interesting and dedicated people. The above blog is really just a brief sample of everything I’ve actually learnt and experienced whilst volunteering. I fully intend to go back next year and every year thereafter.

I’ve spoken mostly about the physical volunteering opportunities, but other skills are needed too. In my spare time I am currently lending my data science skills to source weather data to combine with gull count data for analysis of feeding and roosting behaviour.