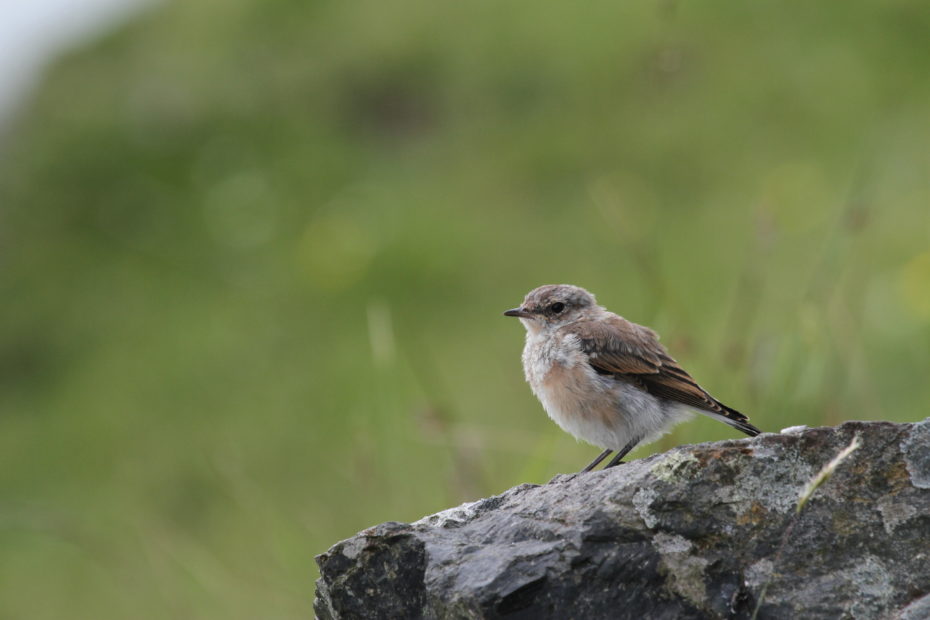 A member of the Chat family, the Wheatear is one of Haweswater’s most striking summer visitors, returning first from an incredible migration-by-night across Africa, to our rocky fells in readiness for the breeding season.

Striking blue-grey males are the first to arrive from migration (Credit: Jamie Scott)

The intriguing scientific name of this species, ‘Oenanthe’, derives from the Greek meaning of  ‘wine flower’, and is thought to have been attributed to these birds as they arrive to Greece at the same time as grapevine flowers come into bloom. A beautiful anecdote!

Their common name however is somewhat less romantic, and refers to one of the more notable physical traits of the species, a “white arse”. In Old English, “Wheat” meant white and “Ear” meant, quite literally, arse. Wheatears do in fact have a stark white rump, and is particularly noticeable on the males who develop into a striking blue-grey plumage with dark wings, a dark strike across the cheek, and a russet orange chest.  The females are a little more subdued as is often the case in the world of birds, however similarly beautiful deep brown, and russet orange colouration, with the notable striking rump.

A male Wheatear showing off his namesake (Credit: Jamie Scott)

Upon returning to Haweswater (males are first to arrive), Wheatears share the rocky upland pastures with Meadow Pipits, who are busy showing off their parachute display flights, and sharing their familiar rapid song. Ravens cronk overhead as Peregrines zip by, each returning to their crag roosts to feed young, as Ring Ouzels burst out their repeating calls into the valley. Upland plants re-emerge and flower in areas excluded from grazing, providing a banquet of invertebrates for our insectivorous Wheatear to devour; everything from spiders to molluscs, beetles, flies and wasps are on the menu.

As the male stands close by on guard duty, the female busily prepares a nest of twigs and grasses, lined with feathers, within a rocky crevice, sheltered enough to protect her young from the harsh prevailing winds. By mid April – May, around 4-7 eggs will be laid with the brood being fed caterpillars, flies, spiders and other invertebrates until becoming fully fledged after around 30, with a second clutch being laid in June.

By October, all birds will have fed enough to build fat reserves for their journey back to Africa, where a winter of warmth and tropical invertebrate banquets awaits.

Heather’s our Visitor Development Officer at RSPB Haweswater, you can get in touch with her at heather.devey@rspb.org.uk

Find out more about the Northern Wheatear